Colorado is the only state in the country where three separate laws govern the actions of police, emergency doctors, mental health and substance abuse experts when patients appear to be a danger to themselves or others and need to be held against their will for 72 hours.

A new law winding its way through the legislature, HB 13-1296, for the first time defines key terms related to involuntary holds including danger to self or others and what it means to be gravely disabled because of a mental health crisis.

Originally intended to meld and clarify the three disparate involuntary commitment laws, the bill instead creates a task force of health and law enforcement experts who will spend the summer studying how best to streamline Colorados laws relating to emergency holds. The task force is expected to produce draft legislation for 2014.

Reggie Bicha, executive director of the Colorado Department of Human Services, says Colorado is the only state in the country with three statutes that govern involuntary commitment.

We believe individuals who are struggling with mental health (challenges) should receive services on a voluntary basis whenever possible. We are absolutely committed to reducing the use of involuntary commitment, Reggie Bicha, executive director of Colorados Department of Human Services testified before the House health committee that unanimously moved the bill forward on Tuesday.

That said, there are times when we must use the system, Bicha said.

Colorados current system of having three separate laws one related to mental health, one to alcohol abuse and the third to drug use is out of date and confusing for workers coping with emergencies on the ground, Bicha said.

Furthermore, behavioral health experts now know that people struggling with mental health challenges often self-medicate with alcohol and drugs. Or the reverse can be true. Substance abuse can increase the chances of psychosis later in life. Since substance use disorders can be intimately tied to mental health disorders, experts say it makes sense to meld laws related to involuntary commitment.

During an earlier briefing for lawmakers on involuntary commitments, experts from Mental Health America of Colorado said that in the 2011 fiscal year, 28,700 individuals were placed on emergency mental health holds or were certified for commitment. Of those:

Data about mental health and substance abuse challenges in jails and prisons is also startling. Arapahoe County Sheriff Grayson Robinson says as many as one in four of the inmates in his jail on any given day are dealing with a mental health challenge.

Arapahoe County Sheriff Grayson Robinson told lawmakers what they already know. The jails of our country have become the mental health institutions of our country because we no longer have the capacity to care for these people.

Data from his facility has found that nearly one in four of about 2,000 people in the Arapahoe County jail on any given day is suffering from a significant mental health issue while 85 percent or more say they were under the influence of alcohol or drugs while engaged in the criminal behavior that led to incarceration.

This is clearly an important bill to mental health. Its also a public safety matter.

Sometimes its confusing about which option to take, Robinson said of Colorados three disparate statutes.

Also testifying on behalf of the bill were patients and parents of children who have struggled with mental health crises. 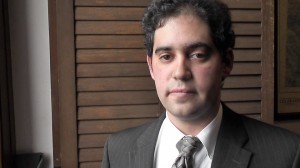 Evan Silverman of Denver said he experienced his first bout of severe depression and paranoia in college. Three psychotic breaks followed in the 1999s. Silverman, who received a diagnosis of schizophrenia, is now doing well and works at Tattered Cover Book Store. But he says that he fears he might not have asked for help if he knew his name could end up on a police list of potentially dangerous patients.

He began by describing his peers in kindergarten:

There were five of us in the advanced reading group. Three of those children ended up at Harvard and one at the University of Texas, followed by medical school at Stanford. I was not one of them. I am the only one who has been involuntarily committed.

The first time he was committed, Silverman recalled the torture of being unable to sleep and counting every second for two days and two nights. He described seeing flies trapped between two panes of glass. Some were alive and some were dead. He empathized with the ones that were alive but could not escape.

My doctor said he had never seen anyone so depressed, Silverman recalled.

He recovered, then had a second psychotic break during which his father had to take him to the hospital. During that commitment, because Silvermans regular psychiatrist was out of town for an extended vacation, he was taken to a different hospital where he had to endure confinement in an isolation room for 13 days.

Ultimately, Silverman was diagnosed with schizophrenia. He believes the emergency holds may have saved his life. But, he said he could have been hospitalized for a much shorter period of time during his second commitment had he received better care.

Silverman is now doing well, working at the Tattered Cover Book Store and is advocating for people with mental illnesses as a board member for Mental Health America of Colorado.

Sometimes parents know that their children need help, but cant get it.

This is an important bill for our communities. This is an important bill for our families, said Rep. Tracy Kraft-Tharp, a co-sponsor of the bill along with Rep. Beth McCann. People in our society have worked with families who may have an adult or adolescent child who is having a mental health crisis. They are at a loss as to what to do and they need help.

Among those who wished his family had gotten help before a tragedy was Ron Liggett.

My son has been in the news for murdering his mother, Liggett told lawmakers.

His son, Ari Liggett, 24, has been accused of poisoning his mother, Beverly Liggett, then dismembering her body.

We spent 20 years with the mental health system and know all its strengths and failures, Liggett said. I am representing myself and perhaps other families dealing with violent children.

Liggett said he gets numerous calls from other distraught parents.

We have a lot of young men that are very frustrated and angry and will be expressing it, he said.

Citing the Boston explosions this week, Liggett said our society must focus equally on the potential dangers of both terrorism and threats related to mental health.

We need to think of resources differently, he said. The ripple effect of what one mentally ill person can do to a neighborhood and a family is huge. Theres no end to this.