“Do Not Spend Money On Unnecessary Medicines”: Experts Told How Not To Go Broke In The Cold Season

Most drugs sold in our pharmacies do not have evidence of effectiveness. And only bed rest can help quickly get rid of seasonal viruses and colds. Do not spend money on unnecessary medicines, but use your wallet wisely. Such advice was given by medicinal experts. 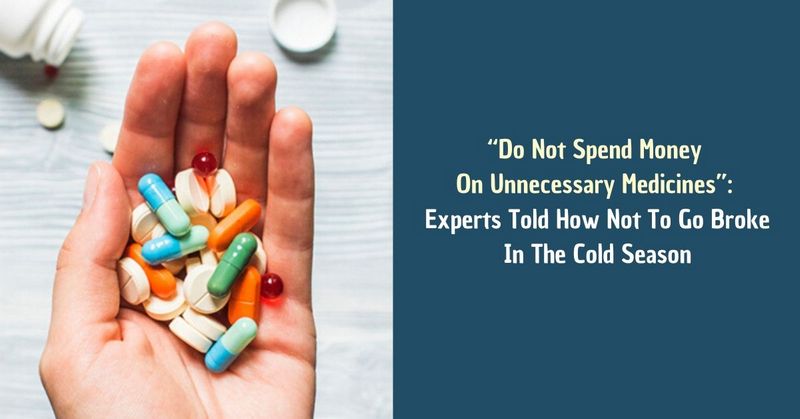 One of the sociological surveys revealed that every tenth resident of the United States saves on medicines but spends up to half of his or her income on them. Five percent do not have money for the necessary drugs. The Candidate of Medical Sciences, general practitioner Alexander Newell said that when it comes treatment of colds, one should not grieve about the lack of funds for expensive drugs because most of them are “dummies”.

Most drugs sold in pharmacies are useless?

“According to my personal observations, 60 percent of drugs sold in our pharmacies are useless. That is, a medicine that has not undergone serious clinical trials, which is not statistically calculated. The section “Mechanism of Action” contains some common words like “improves the protective properties of the body, enhances immunity, etc.» If I see such a medicine, I understand that this is nothing more than a marketing trick. People make money this way. Each “serious” drug with evidence of effectiveness should clearly indicate the expected effect, indicate the required dose and what percentage of patients observed the proper result after taking this medicine, which side effects can occur and in which cases. That is, this is all serious mathematics,” Newell explained. – This is serious research. The release of a good drug costs billions. The manufacturer spends a huge sum on the invention of the formula, conducting clinical trials, which, on average, last from several years to a decade. All these are serious bases and are mathematically calculated. An approved drug is officially allowed for use. This is a very, very serious investment.” – Dr. Newell said.

In our country, most promoted drugs do not have such data, therefore, in order to maximize the consumer’s confusion, manufacturers use general expressions and phrases in instructions and annotations. In fact, no one can say how these drugs really work. For example, the effect of all kinds of immunomodulators and antiviral drugs has been debated for a long time. A whole list of such drugs is on the Internet. People exchange opinions and advise each other to refuse to use them. So how things are going now?

Peter Shelly, professor, general practitioner, a member of the Association of American Physicians, said that “not a single drug used for respiratory infections has a sufficient level of evidence.”

According to him, the surest way to get rid of a cold is to stay on bed rest, increase the amount of fluid consumed and sleep more. In other words, you should let the body itself cope with a temporary ailment. Many doctors claim that there is no drug that can affect either adenoviruses, rhinoviruses, or other viruses that cause colds.

Numerous expensive medications are aimed only at eliminating the common cold, alleviating cough and lowering the temperature.

All these countless trade names, in fact, contain very simple substances like paracetamol and phenisine that cost a few pennies. But in the end, the price can range from $10 to several hundred “,- said Dr. Newell.

“But I want to emphasize that not one of the antiviral drugs that are sold in pharmacies has any statistical effect on the duration of the common cold.”

But, despite the dubious effect of these expensive drugs, they are still in demand. The manufacturer proceeds from the needs of the buyer since the goods are sold well. Pharmacies, in turn, fulfill their well-defined sales plan. They need to sell a certain amount of certain medicines every month, as a rule, the emphasis is made on the more expensive segment. Therefore, pharmacists often try to advise what is beneficial to them, and not to the client.

The types of medicines that should be presented in our market are determined by the FDA. Alicia Hinkle, a representative of My Canadian Pharmacy, said that drugs that enter the national market undergo mandatory registration.

“We have a control and permitting system that allows this drug, and criteria for effectiveness and safety. The same drug in the USA can be presented in different forms. This is some kind of price competition among manufacturers. Plus, the patient can choose drugs at a more affordable price. Today, all regulatory mechanisms are aimed at making drugs cheaper and more affordable. I can say that bestselling drugs cost up to $10. And they really work because the demand for them is growing.”

However, Prof. Shelly does not agree with this opinion. According to him, the longer the drug is on the market, the higher the likelihood that it is ineffective since no one has ever tested drugs 20-30 years ago. Their popularity can be explained by the fact that people got used to them and the names of drugs are passed down from generation to generation.

The professor claims that no one conducts any clinical studies before the drug is registered, it is just enough to prove that it is safe. It can only be a sample of studies in very small groups.

He adds that sometimes even drugs with a 20-year-history on the market are withdrawn from sale. This mainly happens when side effects have exceeded potential benefits. Today, selling drugs is a super-profitable business. According to the American Pharmacists Association, in 2018, 5.3 billion packs of drugs were sold through pharmacies with a profit exceeding 1 billion dollars

“90 percent of the known drugs do not have any effectiveness”, said Prof. Shelly. – This is international data. For example, validolum and corvalol do not work at all. Firstly, because they are indicated for diseases that do not exist, and secondly, they are drugs that are banned throughout the world. People traveling with Corvalol in their pocket abroad have every chance of going to jail because phenobarbital is prohibited.

“We have anesthetized our society to the point that people cannot get rid of these drugs. They take them for no known purpose. As a result, if myocardial infarction occurs, people take Corvalol, a glass of a strong drink, sleep, and only then call an ambulance. The time from the onset of a heart attack to hospitalization is 20 hours on average. People waste their precious time on taking ineffective drugs. Meanwhile, doctors can help these people but people do not go to the hospital. This is terrible”, – said the professor.

Most people have problems with the wrong choice of drugs and huge expenses for them because of the wrong approach to their health. People prefer to self-medicate rather than consult a doctor. With they catch a cold, they begin to take al drugs in a row without getting the proper effect.

The approach to treatment, meanwhile, should be comprehensive and balanced. The effect of a particular medicine depends on the regimen that only a specialist can prescribe it. Not a pharmacist but a doctor.

Alicia Hinkle emphasized that doctors should not prescribe a specific drug but an active substance. The pharmacist, in turn, must offer several medicines from different price categories and tell how one differs from the other.

“Many people go to a pharmacy like to a store and buy any drugs they want, without consulting a doctor! They actually should not self-medicate or buy drugs recommended by their friends or colleagues!” Prof. Shelly added.

The article is released by the following medical experts: