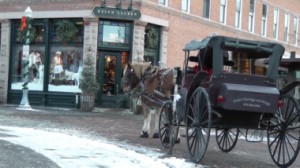 Two ritzy resort counties in Colorado have made a list of the 50 worst counties in the U.S. for working people who are living without health insurance.

Eagle County, home to swanky Vail and Beaver Creek, ranked 42nd worst among U.S. counties with nearly 29 percent of people who earn between 138 and 400 percent of the poverty level surviving without health insurance. Garfield County, home to many service workers for Aspen in neighboring Pitkin County, also made the list. Garfield ranked 48th worst in the U.S. with about 28.5 percent of working people lacking health insurance, according to U.S. Census data from 2010.

In Colorados ski resort towns, workers often have multiple jobs, none of which comes with health insurance. Even people earning decent salaries have to spend so much money on living expenses that many cant afford health insurance. (Read more: Posh Aspen provides dismal health coverage.)

The list of worst counties comes in a new report from the liberal group, Center for American Progress Action Fund.

The study finds that many of the counties in the U.S. that will benefit most from the Affordable Care Act have Republican representatives who have been trying to obstruct implementation of the ACA.

Some of the counties with the highest rates of uninsured are also in states such as Texas and Florida where state leaders have blocked expansion of Medicaid to a greater percentage of the poor. That means people who need access to health care the most may reap the fewest benefits from the reform law, which goes into full effect in 2014.

Too many politicians are putting more energy into political stunts than helping their constituents take advantage of benefits from the Affordable Care Act, Tom Perriello, president of the Center for American Progress Action Fund, said in a news release. Sadly (the report) demonstrates that many of the counties that stand to benefit the most from the new health care law are represented by Obamacare opponents who refuse to help families and businesses in their communities benefit from these reforms.

Elected officials should meet their obligation to help constituents comply with and benefit from the laws and healthcare programs that exist.