Meet Dr. Rich Mahogany, the hilarious, irreverent online doc who uses dark humor to combat the deadly serious topic of male depression and suicide. Dr. M, as his creators affectionately call him, teaches breathing exercises complete with the F-word so you can deal with your SOB boss and that 105-year-old lady doing 7 in the fast lane. His idea of yoga is the seventh-inning stretch. He cleans his desk with a leaf blower, counts a long spell on the toilet as meditation and graduated from Porksausage University. So of course, his therapeutic recipe for guacamole includes bacon.

Welcome to Man Therapy(www.mantherapy.org), the Colorado creation that is going global.

Launched in July by an unlikely trio Colorados Office of Suicide Prevention at the Colorado Department of Public Health and Environment; the Denver advertising firm, Cactus Communications; and the Carson J. Spencer Foundation, a Colorado suicide prevention nonprofit Man Therapy is heading Down Under.

Beyond Blue,Australias leading organization that fights depression, is adapting Man Therapy and plans to launch a national public education campaign this summer. At first, Australian mental health experts were leery of using the word therapy in the name of their site because of the stigma men attach to the concept. But Joe Conrad, founder and CEO of Cactus, helped convince them that smashing that stigma was central to their concept.

Were not apologizing. Were presenting it in a new light.

As the Man Therapy creators explained in a PowerPoint presentation to a national conference of suicide experts:

Men think therapy is for women and sissies. So they dont seek the help that they need, when they need it. Lets show them that therapy and honest talk can be masculine by providing them the therapist they need. A therapist who is a no-nonsense mans man. A therapist who will tell it like it is. A therapist like Dr. Rich Mahogany.

Before signing on, Beyond Blue did a study with Australian men and found they loved Dr. Ms wacky attitude. So they decided to stick with the name Man Therapy and are creating a fake Aussie colleague dubbed Dr. Byron Ironwood who supposedly studied in Vienna once upon a time with Mahogany.

The Aussie un-therapist therapist will dole out advice mirroring the U.S. website. Mental health experts in Canada and the United Kingdom also are planning to join the movement and likely will use Dr. Mahogany for their campaigns, said Jarrod Hindman, director of Colorados Office of Suicide Prevention.

Along with winning a raft of health and advertising awards, Conrad said hes been humbled by the impact Man Therapy started having right out of the chutes.

On July 8, the day the site launched, the New York Times ran a story about Man Therapy. The site received more than 5,000 hits. That night, a message to Dr. Mahogany landed in Conrads inbox. It was from a 28-year-old combat veteran in Baton Rouge, La., who had been struggling with depression.

Apparently the mans therapist had seen the site and told him to check it out.

He took time to write about what an incredible experience it was for him. He said he got a lot out of it and had already emailed the link to combat vets in his support group, Conrad recalled.

He has a young family and said the site already helped him think differently and want to continue in therapy. We didnt create the site for vets or people outside of Colorado, Conrad said.

But, Man Therapy is clearly resonating with veterans, cops and other guys guys around the U.S. and the world.

Weve seen it continue to pick up speed, Conrad said.

For instance, he just shipped a box of materials to a supervisor with the Boston Police Department. And he received an email from the head of the Connecticut National Guard.

They were finding the campaign really helpful. They had just lost three guys to suicide in the last six months, Conrad said.

So far, Conrad says Man Therapy has generated over 225,000 unique visitors with an average of about 572 per day. Men, therapists or women concerned about men in their lives poke around on average for several minutes, an eternity in the online world. More than 50,000 visitors have taken the 18-point head inspection, which generates advice and recommendations. Ninety percent of those who took the self-assessment reported that they were likely or very likely to use the advice.

Funding for the $400,000 project came from the Anschutz Family Foundation. Now those funds are gone and the partners are applying for new grants and keeping the project alive through pro-bono work, professional kudos and word of mouth.

Ive never been closer to a campaign. Its our baby, Conrad said.

Some mental health professionals were skeptical at first because they thought the campaign was too edgy.

But that was precisely the point of it. Conrad and his team tried to come at the campaign from an entirely new vantage point.

We were trying to create something for men. Thats what drove us, no predetermined idea of what would work, he said.

Added Hindman: Weve created a venue for men to dip their toes in the water for mental health support and treatment. Its a place where men can safely and anonymously learn some things, try some tips or tools. And if you need professional help, youve got to man up and get it.

The need for help in Colorado and around the country is more urgent than ever. And targeting men in their middle years has proved prescient.

The U.S. Centers for Disease Control and Prevention released a report earlier this monthshowing that suicides among middle-aged people rose dramatically from 1999 to 2010 both in the U.S. and in Colorado.

Initially Man Therapy targeted men ages 25 to 54, but they are now expanding to reach men up to 64 years old. 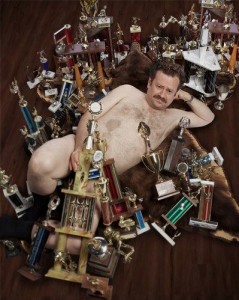 Competitive Therapy the way a man would do it. (Photo courtesy of www.mantherapy.org.)

Try taking the self-assessment and youll see questions like this: Did you know koalas sleep 18 hours a day? Lazy little bastards. Tell me about your sleep habits.

Theres a section of the site called Gentlemental Health 101. Dr. M does a trust fall with himself in the Group Therapy section. Theres One-on-None, DIY therapy. And of course, theres a section on Competitive Therapy where youll get to see Dr. M naked and learn about exercise, camaraderie, sweating, winning and/or hoisting championship trophies.

Beneath the spoofs, however, theres real advice, an omnipresent red phone with links to suicide help lines and ways to connect with other men or real therapists.

We want depression to be a health issue. Its been separated out as a mental health issue. Obviously ones brain is part of ones body. We should screen for it, just like they check your heartjust like asking about smoking or the number of drinks you have, Hindman said.

The serious intent of the campaign is to reach men before theyre in crisis.

Theres a huge void, said Conrad. Guys really bottle up their feelings. Unlike women, they dont have networks of support. They tend to swallow their emotions. We tapped into something thats universal.

The strategy was not to wait for someone to hit a crisis, to catch things before they become a crisis. Its much more of an early-intervention, prevention campaign, Conrad said.

We still have only scratched the surface with the potential impact.