Colorado is flunking when it comes to childrens health and its time to mount an aggressive turnaround campaign.

That was one of the key lessons from the release last week of the annual Colorado Health Report Card.

Were not growing our own healthy children. Our child obesity rate remains in the middle of the pack, said Anne Warhover, president and CEO of the Colorado Health Foundation, which releases the report card each spring. Thats where the foundation is really going to emphasize more and more of our work in trying to prevent childhood obesity. It leads to so much cost in our system. 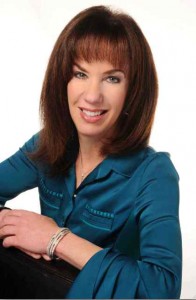 Warhover also announced that the foundation is funding a new position in Gov. John Hickenloopers office: a state director of health and wellness. In an era when Mayor Michael Bloomberg of New York has become the de facto U.S. Surgeon General by combating everything from smoking to sugar-laden drinks and assault weapons, leadership from politicians can be vital in driving improvements in health. Hickenlooper often repeats the mantra that he wants Colorado to be the healthiest state in the nation. Now Ellen Robinson, whose family started Denvers Robinson Dairy in 1885, will become the states new health and wellness director.

Her work will be challenging.

For years, Coloradans have been congratulating themselves because the state is the leanest in the nation. But, in fact, Colorados adult obesity rate has doubled in fewer than 20 years while child obesity rates continue to climb at one of the fastest clips in the nation. 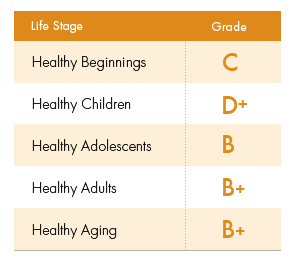 Overall, when it comes to nurturing healthy children, the state declined from a C- in 2011 down to a D+ in 2012, where the state had hovered the previous two years. Pregnant moms and newborns fare only slightly better with consistently poor C grades, while adolescents, adults and seniors get Bs.

For this years report, study authors posed the question What if Colorado were number 1? Analysts at the Colorado Health Institute teamed with the Colorado Health Foundation and found that being No. 1 in 38 key health indicators would not only boost the physical and mental health of Coloradans, but would also save taxpayers and businesses hundreds of millions of dollars annually while helping to revive the economy.

Kelly Brough, president and CEO of the Denver Metro Chamber of Commerce, said people in the business community now understand that improving health in Colorado is central to hiking profits.

The first step toward fixing a problem is acknowledging you have one, said Brough. To not be No. 1 in all of these indicators is shocking. The economic imperative for us to do this is critical.

To not be No. 1 in all of these indicators is shocking. The economic imperative for us to do this is critical Kelly Brough, president and CEO, Denver Metro Chamber of Commerce.

Brough said that prospective employers have long lists theyre checking and that Colorados health status is as vital as the states tax policies.

Were the leanest. We exercise the most and were the smartest, Brough said. I sell this all day long.

But these arent stupid people. They see our growth rate (in child and adult obesity). While the South may be staying ahead of us, were coming on fast. These CEOs are smart enough to look at the generation were raising and those numbers are not at all encouraging, Brough said.

She highlighted some of the potential savings identified in this years Health Report Card if Colorado could climb to No. 1:

Brough said Colorado must tap its popularity with fit, young people and work much harder to give children who grow up in Colorado better opportunities.

Colorado is the top attraction for 25- to 34-year-olds. Why care? They also come very well educated to our state. We have jobs and our quality of life really matters to them: our sunshine, our mountains, our outdoor lifestyles. Were hardworking and smart and we get up earlier on weekends than weekdays.

Employers look for fit, smart employees who cost less because they stay well, fill fewer prescriptions and have much lower rates of heart disease, cancer and diabetes, three of the most expensive illnesses.

They want a workforce that is healthy, she said. But its not enough to be among states with good health. We need to lead the world.

If Colorado continues to rear unhealthy children, the state will soon become unattractive to both prospective employers and bright young people who want to move here.

We are losing our competitive position, she said. Why do we care (about health)? Because it costs so damn much not to care.

Warhover challenged health advocates and business leaders to each tackle a single indicator and fight for first place in the nation.

What if we were No. 1 instead of 36th (on children who have insurance)? An additional 78,000 kids would need to be insured. Thats not a lot of kids. We can do that. We could get to be No. 1 in normal weight (newborns) if 2,100 babies were born in a given year at a healthy weight, Warhover said.

Its not that aspirational, added Michele Lueck, president and CEO of the Colorado Health Institute, whose researchers analyzed the health data for the report card.

Lueck cited some examples. Currently only 77 percent of Colorado kids get preventive dental visits. Hawaii does much better with nearly 87 percent of kids getting dental care.

To beat Hawaii, Colorado would need to get dental visits for 116,000 more kids a year.

It seems like we can get to this, Lueck said and joked that perhaps the business or health groups that sponsor and succeed on that indicator should score a trip to Hawaii.

It seems doable. We can be No. 1 in things other than football, Lueck said.

In addition to capturing bragging rights, the cost savings would be substantial.

Mental health is one of the most striking, said Lueck. The cost savings would be over $120 million annually if we did a better job with mental health, not eliminating it, just getting the No. 1 ranking.

While the 2012 Colorado Health Report Card posts bleak grades overall, Shepard Nevel, vice president for policy and evaluation for the Colorado Health Foundation, sees the cup (of water, not soda) very much half full.

These are goals that we as a state can achieve, he said.

Its very doable to make sure that 2,100 additional babies each year are born at healthy birth weights or that an additional 23,400 children have access to regular health care at a medical home.

Reversing the child obesity epidemic will be the first order of business as the Health Foundation moves forward.

Child obesity has such a significant and enduring impact on health, the economy, our health care systems and education, Nevel said.

These are significant, but very achievable goals.