Under her plan, employers would pay a 6 percent payroll tax for each worker while employees would pay a 3 percent share. Self-employed people and investors would pay a 9 percent tax on income and capital gains.

In exchange for those costs, all Coloradans who have lived in the state for at least one year by the beginning of 2016 would become part of a statewide health care co-op and would get platinum-level health plans, the most generous package of essential benefits under the Affordable Care Act.

Those plans would include primary and specialty care, hospitalizations, emergency visits, prescription coverage, mental health care, substance abuse treatment and some limited dental, vision and hearing benefits. In most cases, patients would not have co-payments or deductibles.

Patients would pick a network of providers and see any doctors who participate in their plan. Aguilar hopes the large providers would serve as accountable care organizations, competing against each other to provide patients with the best care. (Click here to read about how accountable care plans work for Medicaid patients in Colorado.)

Sen. Irene Aguilar is a primary care doctor who used to practice at Denver Health.

We would move from fee-for-service to fees for keeping people healthy, Aguilar said.

Nonprofit insurance companies like Kaiser Permanente and Rocky Mountain Health Plans would likely continue as service providers under the new system. For-profit insurance companies would either start managing health care networks or would no longer exist, meaning Aguilar faces a massive battle from lobbyists. Groups representing businesses in Colorado have been waiting to see Aguilars final bill before deciding whether to support or oppose it.

Aguilar designed her measure as an amendment to the Colorado Constitution. That means she needs to get support from two-thirds of members in the state Senate and House along with the governors signature. Then, at the soonest, Coloradans would weigh in on the referendum in November.

I believe that access to health care is a basic human right, said Aguilar. And eventually we pay for it.

She said she often hears from people who are frustrated with the U.S. health care system.

I agree we have a dysfunctional health system. Heres my idea of how to fix it. This is my idea of ColoradoCare.

Any time you fix something, there are going to be winners and losers. The winners will be the people of Colorado and businesses.

The losers, probably at some level, will be pharmaceutical and medical device companies with whom well bargain. The Affordable Care Act has already put the reins on the insurance industry, but they are not a small force.

A new economic study from University of Massachusetts Amherst economist Gerald Friedman estimates Colorado would spend about $5 billion less on health care in 2016 than if the state proceeded with changes under the Affordable Care Act. The savings would increase over time with an estimated $10 billion in savings in 2020 and $16.8 billion in 2024. A group supporting Aguilars bill, the Colorado Foundation for Universal Care, commissioned Friedmans study with support from the Caring for Colorado Foundation. 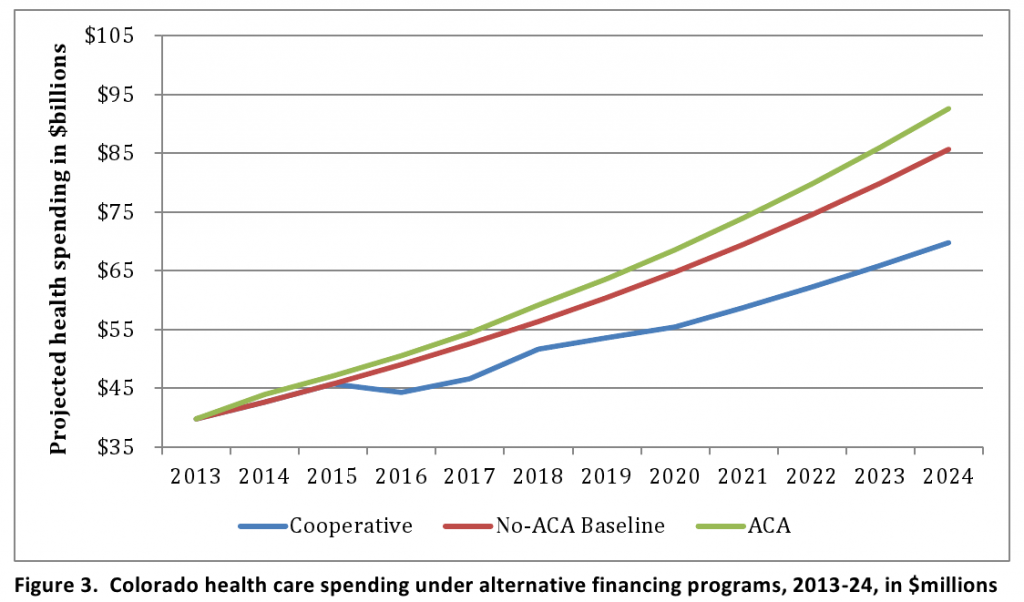 Friedmans study found that health care costs have tripled in Colorado and have grown from under 10 percent of the states economy in 1997 to over 13 percent in 2012. The rising cost of health care has prompted more employers to drop coverage as theyve seen premiums rise, on average by about 8 percent each year over the last decade.

Freidman estimates that health care costs will continue to climb under the Affordable Care Act or under Aguilars plan because in both cases, more people will be covered. His models also found that costs would have kept climbing without any health reform. But creating one giant risk pool composed of all Coloradans would dramatically cut administrative costs and allow Coloradans to cut better deals for care, prescriptions and medical devices. Overall, in 2016, Friedman predicts a statewide health co-op would drive down costs by 10 percent or $900 per person.

He predicts that universal care in Colorado would hold health costs down to about 13 to 14 percent of Colorados economy through 2024. Under full implementation of the Affordable Care Act or no health reform, he found that costs would continue to rise to between 17 and 19 percent of Colorados total spending.

To critics who say Friedmans economic prediction is too rosy, he says, look at the numbers.

If we reduce what were wasting on administration, then theres plenty of room to cover everybody, Friedman said. And if you keep people healthier, thats cheaper than fixing them when theyre broken.

A new study predicts that universal care in Colorado would hold health costs down to about 13 to14 percent of Colorados economy through 2024. Under full implementation of the Affordable Care Act or no health reform, he found that costs would continue to rise to between 17 and 19 percent of Colorados total spending. Source: Economic Analysis of Colorado Health Care Cooperative. (Click on image to enlarge.)

Furthermore, he thinks that Colorado and other states including Vermont, California and Oregon that are considering similar universal care systems, will become more attractive to employers.

Aguilar says businesses across the country are spending on average about 11.8 percent of expenses on health insurance and would welcome the chance to cut those costs to 6 percent.

That appeals to Terri Monley, owner of Gate City Moving,a family business in Denver. Monley has become a fan of universal care and is now talking to fellow business owners about the benefits it could provide them. She said she has about 15 to 20 employees and offers health insurance, but its so expensive for both Monley and her employees that not everyone takes it.

Its the most onerous expense we have. You cant budget for it. You cant predict it, she said. The cooperative would cut the costs for all of us. I could have bought six new trucks for the money Ive thrown away on health insurance. Its a terrible expense.

In terms of economic benefits to the state, Aguilar said it would be like Medicaid expansion on steroids.

A study that the Colorado Health Foundation released last weekfound that expanding Medicaid to 275,000 Coloradans would create jobs, boost GDP and bring hundreds of millions of federal dollars to Colorado.

Aguilar said her plan would magnify that economic growth while also covering almost everyone in the state.

Aguilar said universal care does not mean a government-run system.

I absolutely do not want the government running health care. We are still going to have a market between the health provider and the patient, said Aguilar, who is herself a primary care doctor.

The provider will need to do a great job at taking care of the patient so they dont switch. They will need to be innovative and take better care of people for less money.