For organizations and individuals working to address the epidemic of childhood obesity, the biggest challenge is to make it fun. Or at the very least to avoid making it humiliating, frustrating, boring and punitive.

We need to bring back creativity. Creativity is crucial to solving the obesity crisis, said Chris Waugh, director and co-founder of the design innovation consultancy IDEO. Waugh spoke Friday at an event called Symposium Unplugged, sponsored by the Colorado Health Foundation.

Waugh presented 10 steps to designing effective approaches to solving problems and offered vivid examples of how they have been employed in everything from economic development in Iceland to Nikes effort to market athletic clothes to non-athletes.

When it comes to childhood obesity, Waugh said so much of the message is negative, it makes people feel overwhelmed and hopeless. Much of that information about the scope of the problem, the long-term impacts of obesity on a persons well-being, the societal costs is valuable because it creates widespread awareness of the challenge.

But the problem with that dire message is that it doesnt lead to a solution.

Design thinking is starting with people first and not worrying about whether the solution is feasible, he said. Its meeting people where they are and inspiring them. 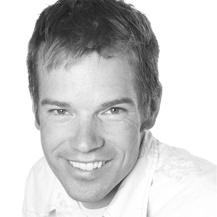 In the case of obesity, the challenge is to make healthy living more interesting and to create new healthy social norms in organizations, families and communities.

Step one: Empathy sets the stage.

When it comes to childhood obesity, Waugh said, that means finding the kids point of view. This involves listening to people across a broad spectrum of cultures and experiences.

The extremes amplify the middle, he said.

In working with chef Jamie Oliver of the Food Revolution, Waugh said they found many children couldnt identify common vegetables because theyd never seen them before and most knew little about cooking because they rarely saw it in their homes.

A variety of approaches were taken, including offering cooking classes. Waugh said they found that men would eagerly participate if the classes were pitched as a means for the men to become more appealing and sexy on the dating scene.

We never said the word healthy even though they were taught to cook healthy foods, he explained. The men were coming to the class to achieve a short-term desire: sex.

A project to get workers at one company to cook at home more often provided a good example.

The company asked employees who liked to cook to spend time during their lunch hours prepping ingredients for dinners for their fellow employees who didnt know how to cook. The ingredients and instructions for completing the dishes were placed in bags for the employees to take home at the end of the day.

Then employees were invited to post pictures of their families eating the meals or helping prepare them. The photos that emerged were touching images of children interacting with their parents, cooking together and enjoying the results.

With a problem as complex and entrenched as obesity, he said, its important to focus on innovative efforts. He cited a walking school bus activity at one elementary school in which adults accompanied children who walked to school along the bus route with pupils joining them at each stop along the way.

The skill for managing money, for example, is similar to that needed to manage a diet. Our impulse is to spend what we have immediately and not think about the future, Waugh said, just like our urge to eat a platter of brownies without thinking about the consequences. Many lessons in teaching healthy eating can be found in program for teaching good money management.

Waugh suggests that people focus narrowly on a piece of the problem and really nail the approach to a solution before applying it broadly.

If food labels identified servings by how many miles it would take to walk them off instead of by calorie counts, Waugh said it might change peoples minds about what they eat.

As with the example of the men who showed up for cooking classes because they wanted to be more attractive to women, Waugh said there are many different ways to present things in a more appealing light, such as calling activity play instead of exercise, describing fresh fruit as delicious and special instead of merely nutritious, and presenting cooking at home as fun family time instead of drudgery.

Step nine: Meet people where they are. For this one Waugh showed an iPhone app aimed at young children that delivers positive messages through popular Sesame Street characters. The 99-cent Elmo app already has received 53 million calls, he said.

Step 10: Find the moments that matter.

In each community, the challenges are different. Whether the problem is junk food in school lunches, lack of access to fresh foods in a neighborhood or unsafe streets, targeting solutions in meaningful ways that really help is critical.

The goal is to create tangible experiences that inspire healthy behavior.

Its not about trying to change attitudes, he said.