Good health makes us happy and happiness makes us healthy.

So what are the secrets to becoming happier and healthier?

Daniel Gilbert, a Harvard psychologist and author of the bestseller, Stumbling on Happiness, shared his insights on Monday during a speech at his alma mater, the University of Colorado Denver..

His prescription for a happy life could be summed up with these mini-mantras:

(Ahh. Happiness is summing up happiness in 143 characters!)

But, wait a minute. Children dont make you happy?

Gilbert knows that this statement is heretical among parents, so he dangles some hope that humans will continue to ditch their own happiness and perpetuate the species. Happiness among parents is highest when a woman is pregnant, then starts plummeting during the toddler years, bottoms out when kids are adolescents, then returns to baseline by the time the kids leave. Note to parents: hold your breath until the kids go to college.

Studies show that people are happy in happy marriages, at least until about their 15th anniversary. Then they might hit a rough patch. People in unhappy marriages get happier when they get divorced. 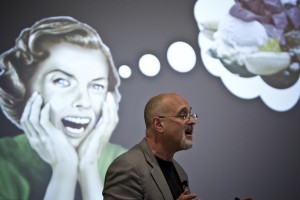 Harvard psychologist Daniel Gilbert returned to his alma mater, University of Colorado Denver, this week to discuss his research on happiness. Gilbert is the author of the bestseller, Stumbling on Happiness, and hosted the PBS show, This Emotional Life. Photo by Nathan W. Armes.

And money is a complex predictor of happiness. The first dollar a person earns makes them very happy. But once people earn about $50,000, their happiness barely increases with each additional dollar. Economists call this an inflection point.

Gilbert says most people with money dont spend it well. Happiness goes up when you spend on others, not yourself. Even with just a couple of dollars, he said buying a stranger a coffee for no reason will give the buyer a happiness jolt.

Buying yourself stuff is good, but not as good as buying for other people.

Another vexing aspect of happiness is that people are lousy at predicting what will make them happy.

The reasons you are sometimes unhappy is you aim for the wrong things, Gilbert says.

For example, surveys show that people across the country are convinced that they would be happier if they lived in California. In fact, people in California rank near the bottom for happiness (46th). (Colorado ranks 21st among the states.) Why do California dreamers get it wrong? Gilbert flashes a photo of smiling, tan surfers enjoying the beach. When we contemplate happiness in California, we imagine that beachfront perfection and leave out all the details, like work, traffic jams, earthquakes, expensive housing and the same old problems that dog us wherever we are.

Its good that imagination leaves out details, Gilbert says. But all of the details will affect your real experience.

All the stuff that happens in Denver happens in California. You take your life with you.

Everyone overrates how important big events will be in their lives. Gilbert describes research in which college students were asked to imagine how happy they would be if their football team won or lost a big game. Winners imagined they would be happier. Losers guessed they would be sadder.

The students were much more accurate in their predictions when researchers asked them to also think ahead to specific events that were coming up in the three days after the big game. It turns out that focusing on details helped the students put the game results both positive and negative into perspective.

We are more resilient that we think we are, Gilbert says.

While humans are tough, theyre not great at imagining the future.

We have a tendency to think that what we want now is what well want later, Gilbert says.

Instead, it turns out that what makes us happy changes over time.

For example, Gilbert describes an experiment at the University of Colorado Boulder, where researchers asked people to predict whether hunger or thirst would be more important to them in the future.

When scientists asked people before a workout, answers were divided. But, when they asked after the workout, nearly every respondent said thirst was more important.

When they are in a state of thirst, its very easy to imagine being thirsty, Gilbert says. This tendency to assume that tomorrow will be very much like today has interesting consequences.

Comparative happiness is also important. In one of Gilberts experiments, students rated their anticipated pleasure over eating a bag of chips. In one room, some chocolate sat nearby. In another room, there were cans of Spam. The researchers didnt point out the other food to the students, but they automatically factored in what they could have had, rating the potato chips lower when compared to chocolate and higher compared to Spam. In reality, the students satisfaction ratings were nearly identical when they actually ate the chips.

It turns out that humans are very good at making the best of their circumstances.

Rationalizing gets a bad name, but it doesnt mean making things up. Often there are several equally reasonable ways to look at things.

You get fired. This could be an opportunity to start writing poetry. Thats rationalizing, not making stuff up.

By and large people fare much better in the face of tragedy and trauma than anyone, especially they themselves, would have predicted.

The bottom line is that pondering happiness is a luxury that only recently became possible for humans, including Americans who embedded the pursuit of happiness in the Declaration of Independence.

Now theres an explosion of happiness research among economists, brain scientists, and policy wonks, all of whom think happier people will be healthier and more productive.

Once upon a time, life was nasty, short and brutish, Gilbert says. You woke up in the morning and tried not to die.

There was no secret to happiness. There just wasnt any.