Teen marijuana use spikes along with expulsions, arrests

A handful of students from Denvers East High School recently spent a warm January lunch period huddled against a brick home two blocks from the school, passing a joint and discussing the merits of medical marijuana.

It smells better than what you get on the street, they say, and is more potent. The buds are whole, not ground up like oregano.

I get top shelf, boasts a 16-year-old boy. My cousin works at a dispensary. So he brings maybe two zips (plastic bags) a day that theyre just going to throw out.

Across the street is a medical marijuana dispensary that advertises a trip to the moon for customers. It is exactly 753 feet from East, according to the schools former principal, who has measured it several times. Another dispensary is 1,010 feet away.

This is not in any sense healthy for our young people, said John Youngquist, the former principal who has pleaded for years for help in protecting schools from the proliferation of dispensaries.

Federal prosecutors echoed those concerns in January when they targeted medical marijuana dispensaries within 1,000 feet of schools for their first crackdown since hundreds of shops with names like Dr. Reefer and Ganja Gourmet began spreading across the state in 2009.

U.S. Attorney John Walsh cited a dramatic increase in student abuse of marijuana in warning 23 dispensary operators to move within 45 days or face criminal action and seizure of their property. That deadline expires Feb. 27.

Scores of other dispensaries can expect shutdown notices soon. In all, Walsh now says he plans to target over 100 Colorado dispensaries located within 1,000 feet of a school, relying on federal law that creates stiffer penalties for any drug use near schools, playgrounds and places where young people gather.

An investigation by Education News Colorado, Solutions and the I-News Network shows the number of drug violations reported by Colorados K-12 schools have increased 45 percent in the past four years, even as the combined number of all other violations has fallen.

The statewide data do not distinguish between marijuana and other drugs, but interviews with school and district officials, health care workers and students across Colorado depict marijuana as the overwhelming cause of the increase.

Some school officials used descriptions such as drowning and under siege to portray their battle with the increase in drug violations and what they view as a seismic shift in student attitudes about marijuana.

When I grew up, it was horrible if you got caught with pot, said East teacher Matt Murphy. Now there are little green medical signs everywhere. It seems healthy. Were at the front lines of this huge shift where kids think its OK.

Among other findings of the investigation:

Located along downtown Denvers busy Colfax Avenue, a hotspot for marijuana businesses, East is among the schools statewide surrounded by multiple dispensaries. But East is far from alone.

The investigation found some of the schools with the biggest increases in drug violations have multiple medical marijuana dispensaries within a mile or closer. 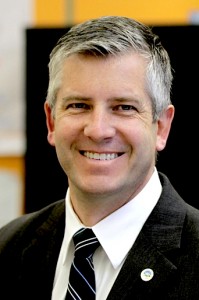 East, seen by many as Denvers premier public high school, has had up to five medical marijuana dispensaries within a three-block radius of its campus. The number of drug violations at the school has tripled since 2009.

But not all schools with nearby dispensaries saw an increase in drug violations and some reported their numbers of drug-related incidents declined.

Brian Vincente, director of Sensible Colorado, an advocacy group pushing for the legalization of marijuana for adults, said dispensaries are not to blame for increases in student drug violations.

Who can buy? Patients with certain debilitating conditions, which are listed in the ballot measure approved by voters in 2000, can apply for a medical marijuana card. These include cancer, glaucoma and HIV/AIDS.

Age limits: People under 18 must have parental consent to obtain a card.

Security: Employees at medical marijuana dispensaries who check patient IDs and registry cards are required to pass criminal background checks. Dispensaries are required to have locked doors and extensive camera systems, and to follow other measures set out in a 72-page list of regulations.

Quantity: Patients can buy up to two ounces per day.

Medical issue: 94 percent cite severe pain, one of the debilitating conditions. The second most common complaint is muscle spasms.

Location: 55 percent of patients live in the Denver metro area

Theres never been a recorded case of dispensaries selling marijuana to high school kids, he said. That is not the problem. Dispensaries are a highly regulated industry.

Vincente says students are getting marijuana the same way theyve gotten it for the past 50 years illegally.

Others see a clear link between the dispensaries and increased student use of the drug.

Of course theres a correlation, said Rebecca Hea, executive director of the Denver Childrens Home, which provides a drug and alcohol counselor at East.

Its a lot easier to get access to marijuana, she said, noting the number of referrals to the East counselor is growing so astronomically, shes unable to meet the need.

There is a perception that if its medically sanctioned, it cant be that bad, Hea added. It seems condoned because the name medical is in front of it.

Nicole Veltze, principal at Denvers North High School, which also has a number of dispensaries nearby, said the actual location of the dispensaries doesnt matter as much as the fact theyre widespread.

Veltze is particularly concerned about long-term repercussions for kids.

When marijuana is found on students, we have to call law enforcement, she said. Due to the rise in availability of marijuana, were making more and more calls to law enforcement for this, and so were contributing to the criminalization of our kids.

Youngquist, who was principal at East for five years until getting a promotion in December, is convinced that dispensaries near schools increase use.

They create a context for students that is all about marijuana, a context that says this is healthy, he said. Theres just a very, very large amount of marijuana present in our community and theres easy access for young people.

The school has taken a proactive stance, with administrators frequently patrolling nearby Colfax Avenue during lunch. Its then, and driving to and from the school, that Youngquist noticed students hovering near some dispensaries.

Its as easy as standing outside, he said. If you keep your eyes open and drive by, kids will be out front waiting for the possibility to buy.

Some East students have a term for it. They call it shoulder-tapping.

You stand there and when someone goes in, you say, Hey, will you get me some weed in there? explained a 17-year-old boy.

Some older students, older siblings and recent graduates have medical marijuana cards, the boy said. There are even coupons to sweeten the transaction.

Buying through dispensaries is cheaper than buying on the streets, he said. You call people who have a card. There are buy-one, get-one free deals.

Managers of dispensaries near East did not return calls for comment.

East students are divided over whether nearby dispensaries are fueling an increase in marijuana use.

The fact that theyre close by makes it easier for it to happen at school, said one 16-year-old girl, but she added, If kids really want to do it at school, theyll find a way to do it.

Another boy, 16, said he thinks the sheer number of dispensaries may make the drug more attractive.

Thats probably the effect that dispensaries have, he said. Its like Starbucks. You think whats so good about Starbucks? And youre going to go try some.

2000 A majority of Colorado voters, 54 percent, approve Amendment 20 allowing caregivers to provide medical marijuana to parents who suffer from specific conditions. Patients must have recommendations from a doctor and register with the state.

2009 Medical marijuana dispensaries proliferate across the state after a new U.S. attorney general signals the federal government will not prosecute medical marijuana in states that allow it and the state health board considers but declines to limit the number of patients a caregiver can serve. With no state law in place to regulate dispensaries, some municipalities begin approving their own regulations.

2010 Local authorities continue their own efforts to govern medical marijuana dispensaries. Some, including Denver, approve a 1,000-foot buffer around schools but allow those already there to continue operating. State lawmakers enact legislation, effective July 1, to regulate and tax medical marijuana businesses. It includes a 1,000-foot buffer around schools but allows local officials to make exemptions.

2011 Federal prosecutors on Jan. 13 notify 23 dispensaries operating within 1,000 feet of schools that they have 45 days to move or face criminal prosecution. The deadline is Feb. 27. Federal law, which continues to see marijuana as an illegal drug, carries enhanced penalties for drug use or distribution near schools. State records show more than 700 dispensaries located throughout Colorado.

More than a dozen students interviewed said they see a growing number of their classmates using marijuana.

Its become more of a thing to do at school, to rebel or if you dont like a class, a 16-year-old girl said. Its a way to not skip class, but not be there in a way.

Schools are singled out in contradictory local, state and federal regulations governing the use of marijuana.

While Colorado voters have approved the use of marijuana for medicinal purposes, and voters will consider an initiative this fall to legalize it altogether in this state, federal law still views it as illegal.

State laws regulate medical marijuana businesses to some extent, including creating a 1,000-foot buffer around schools, but they also allow leeway for local authorities. So while 85 municipalities have banned dispensaries altogether, others have allowed them as close as 400 feet to schools.

In Denver, City Councilwoman Jeanne Robb said city officials acted only after the dispensaries began proliferating so they compromised in allowing dispensaries already less than 1,000 feet from a school to continue operating.

Robb supports the federal crackdown but isnt sure it will make a difference.

Our society has said its medicine. Im afraid it removes the idea that its still a drug. Now the question is how do we deal with the fallout on our youth? Im not sure we can really go back.

Denver City Councilman Charlie Brown, a key sponsor of citys medical marijuana regulations, said he was shocked and disappointed by the increase in drug violations in schools.

We need to get the people out of the business who shouldnt be in the business, he said. Our job is to clamp down and make sure they dont abuse it and if they are, were going to close them down.

The federal action is likely to shut down only one dispensary near East. But for Youngquist, thats a start.

For years, he said he felt nobody was listening as his staff struggled to respond to the growth in medical marijuana dispensaries around the school.

Ive gone and spoken with members of city council and state legislators and asked the question regarding the impact on youth, Youngquist said. They told me, Its not something we thought about.

Im disappointed that young people werent considered when our government decided to implement a law and make medical marijuana legal. 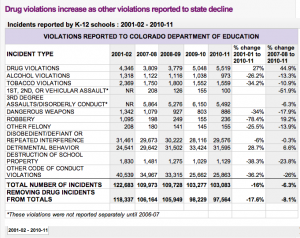 Drug violations increase as other violations reported to state decline. Click on image to view the data.