More than 5,200 people are on a waiting list to receive primary care through Denver Health, and across Colorado at least 20,000 more low-income patients are waiting to receive care.

In Denver, the waiting list at the citys safety net health system began in 2008 when the economy started its freefall.

At its peak, Denver Health had 7,200 patients on its waiting list. About 80 percent of those waiting for care in Denver have no health insurance while the rest have either Medicaid, Medicare or private health insurance.

The reality is that there are more patients in the entire state who are uninsured and need access to care from safety net providers than there is capacity in the safety net provider system, said Dr. Paul Melinkovich, a pediatrician and director of Community Health Services for Denver Health. We cant handle all the people who want to get in.

While its difficult to track exactly what is happening to people who cant get care through Denver Health, Melinkovich and others are certain that some patients stuck on waiting lists are getting sicker and winding up in hospitals.

He said the acuity or severity of illness is increasing, which pushes costs up. People who show up in Denver Healths urgent care center or in the ER dont have basic health complaints.

Its not a sore throat and a headache. Instead it may be diabetes thats been out of control for months. Or, I lost my insurance and cant fill my blood pressure medication. Its uncontrolled hypertension. It may be chronic painfrom a tumor thats bleeding, Melinkovich said.

In Denver, the cause of the problem is relatively straightforward, but difficult to resolve: lack of money. Denver Health and community health systems across the country anticipated hiring additional medical providers in 2011 to begin ramping up for 2014 when hundreds of thousands of newly insured patients are expected to flood health systems across the nation under the Affordable Care Act.

Money disappearing before our eyes

But, funding for additional teams of providers got ensnared in the much bigger budget battles in Washington. The Washington Post and Kaiser Health News reported this month on the national impact of promised funds that never arrived.

Denver Health was one of a record 810 health centers who anticipated receiving $250 million to serve 2 million additional people across the country. But the Post reported that instead of awarding the promised $250 million, the Obama Administration handed out just $29 million as part of the deal to trim the deficit.

Across Colorado, as demand for care at community health centers is increasing, hopes for new funding are dimming. 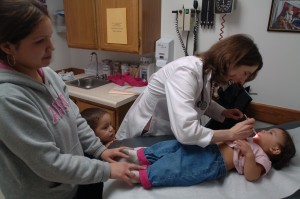 A family exam at the Pueblo Community Health Center. Children and pregnant women are never placed on waiting lists in Pueblo or at Denver Health. But demand for care has meant that some adults must wait to get primary care.

There was $11 billion earmarked for community health centers and its disappearing right before our eyes, said Polly Anderson, policy director for the Colorado Community Health Network, a coalition of 15 community health systems with 131 sites across the state who provided care for a total of nearly 459,000 people last year.

The federal funds were supposed to start flowing in 2011 and help community health centers build capacity over five years.

This is a real factor in the waiting lists. We all anticipated that by now, wed have more grants and wed be expanding existing sites and building new ones. The need is increasing, but the funding on the federal side is really flat, Anderson said.

At the same time, state funding for community health centers has declined by $38 million over the past three years. The cuts have come in three areas: loss of funding to care for the uninsured, cuts in Medicaid reimbursements and the loss of grant dollars for prevention programs like prostate cancer screening.

Overall, Anderson attributes waiting lists across the state to the lousy economy.

As people lose their jobs and health insurance, they need somewhere else to seek care thats affordable. Waiting lists are a real reflection of the economy, she said.

Altogether Denver Health served 117,000 patients in 2010 and anticipates serving 120,000 this year, an estimated quarter of Denvers population. Anyone needing care immediately will be seen either in the urgent care clinic or in the ER. Adults who are trying to get in to Denver Healths eight family health centers for primary care sometimes have to wait four to six months before they can join the system.

In Pueblo, the wait can be even longer and the challenge of enticing primary care providers to a more rural area can make it even harder to reduce waiting lists. Pueblos safety net health provider, the Pueblo Community Health Center, served about 23,000 patients last year. But in 2008, the center had a waiting list of 2,600 people. In order to reduce that waiting list, the center embarked on an expansion campaign and raised money to triple the size of its main clinic. Thanks to the new building and successful recruiting of four physician assistants and two doctors over the past two years, Pueblo has cut its waiting list to just over 1,000 people.

Our single limiting factor is recruiting providers, said Janet Fieldman, chief foundation officer for the Pueblo Community Health Center. A lot of medical students are going into specialty care because they know it pays better and theyre coming out with major loans. Its really frustrating and its hard to find family physicians.

Typically it takes us about a year to recruit one provider, Fieldman said.

Pueblos economy has remained relatively flat. Fieldman said Pueblo never experienced a great surge in its economy, so there wasnt as much to lose. But 10 percent cuts in the Colorado budget over the past two years for community health centers have meant that Pueblo has had to try to serve more patients with fewer dollars.

When the waiting list was at its worst, patients in Pueblo had to wait as long as two years for care. Now, patients wait about a year.

The reason we have a waiting list in the first place is we need to make sure our current patients receive the same care and access that they have now. The only way we can keep that service level and quality high is to have a waiting list, Fieldman said.

There are exceptions to the waiting list. Children and pregnant women never wait. Providers also try to ensure that if parents of young children are uninsured, they can get in to the system relatively quickly as well.

You want the whole family to have coverage and access to care, Fieldman said.

People who are discharged from the hospital also get instant access because managers want to be sure that those people dont wind up right back in the hospital.

Some people think having exceptions makes it unfair, Fieldman said.

The Pueblo system has tried to contact every person on the waiting list. Its difficult to find some of them since people who are uninsured tend to be transitory or can change phone numbers frequently.

Once in, patients more invested in care

Surveys of new patients have shown an unexpected side effect of the waiting list.

When people have been waiting a year or more and get access (to care), they are the most dedicated patients. Theyre very compliant with treatment plans. Theyre very grateful and they keep their appointments. Theyre invested in their health.

Because so many people are waiting for care, the Pueblo center will discharge patients if they repeatedly fail to show up for appointments or are disruptive, rude or violent.

In Denver, Melinkovich thinks the solutions to reducing waiting lists are multi-pronged.

We either need to get the uninsured health insurance so they come with a method to reimburse us for providing care for them and we can add more staff for patients who have Medicaid. Or we need some sort of base funding to take care of the uninsured. Its probably a combination of the two.

In Denver, recruiting physicians and other providers is much easier than it is in rural parts of the state.

Said Melinkovich: If the funds were available to pay providers, we could find people to hire. In Denver, we are certainly better off than most of the state.

Sasha Dillavou contributed to this report.