Gov. John Hickenlooper officiated at the Beaver Creek wedding of a TriZetto executive on May 28 weeks before naming controversial TriZetto appointee Eric Grossman to Colorados new health exchange board.

The governors spokesman, Eric Brown, said Hickenlooper performed the wedding on behalf of the bride, Kasia Iwaniczko, who is a longtime friend. The wedding took place at the Ritz-Carlton Bachelor Gulch. Through Brown, the governor said he had not met the groom, David MacLeod, or known where he worked until the couple came to Hickenloopers office for a 15-minute meeting in May to discuss plans for the ceremony.

Brown said that Hickenloopers decision to appoint Grossman to the health board had nothing to do with the wedding ceremony and that the governor has no personal relationship with the groom or any other TriZetto executive.

Iwaniczko MacLeod met Hickenlooper about 10 years ago through CultureHaus, an arts education program that he helped create with the Denver Art Museum.

Iwaniczko MacLeod has worked as a philanthropist for numerous nonprofits and as a lobbyist. She now owns a consulting firm. Shes also a Hickenlooper campaign contributor. Records show she gave Hickenlooper $500 for his gubernatorial bid. MacLeod is vice president of research and development and technology architecture at TriZetto. He is also the companys chief technology officer. MacLeod donated $100 to Hickenloopers campaign last year. Grossman, the health exchange appointee, is a colleague of MacLeods. Grossman is vice president of strategy and government affairs for TriZetto.

Grossman was not invited to the wedding, Iwaniczko MacLeod said. He did not make a campaign donation to Hickenlooper. Other health exchange appointees whom Hickenloooper appointed donated to his campaign including Elizabeth Soberg, chief executive of United HealthCare of Colorado, who donated $525 and Richard Betts, a Telluride businessman, who gave the governor $350. Arnold Salazar, executive director of Colorado Health Partnerships, LLC, a consortium of mental health providers in rural Colorado, donated $895 to Hickenloopers campaign. He was appointed to the health exchange board byHouse Minority Leader Sal Pace, D-Pueblo. Steve ErkenBrack,president and CEO of Rocky Mountain Health Plans, gave $1,000 to Hickenloopers gubernatorial opponent, Scott McInnis and was appointed to the exchange board by House Speaker Frank McNulty, R-Highlands Ranch.

The governors spokesman said he understands that there is turmoil over Grossmans appointment and that conspiracy theorists might want to make a connection between the wedding and the appointment.

But theyre missing the mark on this one, Brown said.

The governor continues to support Grossman despite calls by consumer groups that Grossman should resign.

We have no reason not to (have faith in him) right now, Brown said.

The governor and his health advisers believe in having different voices on the health board, Brown said.

The board has only had one meeting, he said. Theyre going to move forward and work through all these issues.

Consumer groups believe that Grossman is a health industry insider and question whether he will be willing to vote against clients if necessary. Grossman was supposed to be one of five non-industry appointees on the nine-member board. (Four other board appointees work for health insurance companies.)

Solutions first reported on July 6 that Grossman penned an article for clients last fall called Theres Gold in Exchanges. Heres How to Stake Your Claim.

In that article, Grossman wrote that it was good that health exchanges would generate more business for insurance companies, bad that they would force more competition and ugly that government regulations would drive down profits.

Grossman told Solutions he regrets using those words, but that he has no intention of resigning and supports the health exchange. He said he wants to perform his civic duty by evaluating potential IT programs that the state might use. 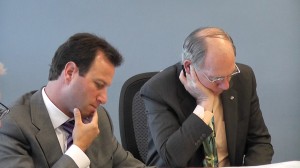 Eric Grossman, left, a TriZetto executive, at the first health exchange board meeting. On the right is Colorado Insurance Commissioner Jim Riesberg. Consumer advocates have called on Grossman to resign from the board.

Grossman said he carefully followed legislation related to Colorados new health exchange. He said his company decided not to bid for business related to the exchange.

Government business has never been a key aspect for TriZetto, he said.

Eric Brown said the governor does not remember having met Grossman previously and that the governor did not attend the wedding reception. After the ceremony, he posed for photos with the family, then left to rejoin his wife and son for the Memorial Day celebrations.

Iwaniczko MacLeod is upset that her private wedding has become a topic of public discussion. A two-time breast cancer survivor, she lost her father to cancer weeks before the wedding. She said Hickenlooper has been supportive of cancer causes and her other philanthropic interests for years and kindly agreed to perform the wedding ceremony.

It was a special and touching ceremony. John paid great homage to my father, she said. John did us a favor by coming to the wedding, then he took a few pictures and didnt attend the reception.

There was no canoodling. There was no interaction. This was a personal relationship that I have with John. Thats it.

She says Grossmans appointment had nothing to do with her husband or their wedding.

I dont understand. How would one would have to do with the other. I cant help where my husband works.

Editors Note: In the interest of full disclosure, then Mayor Hickenlooper also officiated at the wedding of Mark Eddy and Solutions Editor Diane Carman in 2004.