Every Wednesday, Maia Rogers goes to her regular breakfast spot down the road from her childrens schools.

Often she is joined by friends or sometimes by her son home from school with a cold, but on this day she is alone, her first day free of an oxygen tank since a bout with pneumonia.

Rogers said this weekly breakfast is one way she has slowed her pace to enjoy life after being diagnosed with cancer.

Though she mocks the clich in her feelings, she said cancer has changed her perspective. Youve just had a life-changing illness, she said. What do you want to do with your time?

Rogers was diagnosed with stage II breast cancer at the surprisingly young age of 35.

After being inspired by watching the mother in Terms of Endearment, Rogers was vigilant about self-examination and discovered a lump in her breast.

Her first doctor said it was nothing to worry about: It doesnt feel like cancer. 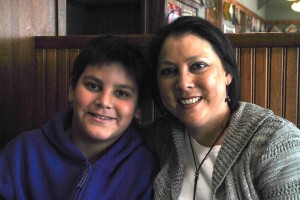 Maia Rogers and her son

But later that week, while she sat at work alone, he called to say it was, in fact, something. The mammograms hadnt caught her tumor because of her high breast density, but an MRI led to a diagnosis.

So began Rogerss battle with her disease

About 85 percent of women with breast cancer who are in remission for at least five years never relapse, she said.

Four years and four months after the end of her first treatment, an MRI showed that Maia had signs of recurrence.

A lot of women put faith into numbersI thought I was part of that 85 percent, she said. But I wasnt.

This time, her cancer had metastasized to the liver, making it stage IV and likely a lifetime battle.

When youre stage IV, you dont talk about surviving.

Having had a successful career in public policy, Rogers went to work at Susan G. Komen for the Cure.

After suffering through cancer, I thought Lets get it done. Lets get this cured, she said, because you dont want anyone else to go through this.

There is so much support behind breast cancer, she said. But its frustrating that money and efforts target the earlier stages when women in the later stages are the ones dying.

Rogers has accepted that being stage IV means that she will always be a patient, so she is putting her life first. She even managed to arrange a round of chemotherapy in her native Hawaii, so she could visit family.

This is my life. This is the way its going to be, she said. I still live a good life, I can do a lot of things I did before breast cancer.

With the support from her husband, two children, friends and her own strength, Maia continues to survive through pneumonia, clinical trials and side effects.

Im not breast cancer, she said. I am ready to move on.