When a robber pointed a gun at Oumar Ouattara while he was working the graveyard shift at a busy 7-Eleven on Denvers East Colfax Avenue, Ouattara begged the gunman not to shoot and wondered why he had ever left his native Ivory Coast.

Like many immigrants, Ouattara had to take any job he could to survive after arriving in Colorado.

Unlike some immigrants, Ouattara was highly educated and had left behind a good life in his native Africa. A doctor, he was married and owned a four-bedroom home. On a lark, Ouattara entered the annual U.S. lottery that awards 55,000 green cards to immigrants from diverse countries. In 2004, on his first try, he won the right to live and work in the U.S.

He came with his wife and their first child. At first they had to live in a hosts home, squeezing together into one room.

Back home, Ouattara had had both comfort and respect. 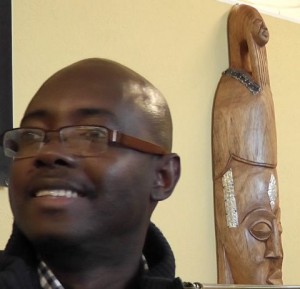 Dr. Oumar Ouattara of the Ivory Coast visits It Takes a Village clinic in Aurora.

In Africa, a physician is like a god, Ouattara said.

In Denver, Ouattara had to struggle to survive.

This is the price you have to pay. This is the sacrifice you make to move your life forward, he said.

Ouattara took his first paycheck and moved his family into a one-bedroom apartment. While working difficult, sometimes dangerous jobs far removed from his health expertise Ouattara crafted a plan for a future.

His medical degree from Africa would not allow him to work as a doctor in the U.S. Rather than starting over and essentially going to medical school again, Ouattara decided to educate himself in a different area public health. He knew that learning about prevention of critical health problems like HIV would give him great knowledge to take back to Africa someday.

Ouattara earned a masters degree from the Colorado School of Public Health in 2009. He and his wife are buying a home and now have two children. And Ouattara found work in his field at the Colorado African Organization, a nonprofit founded by Africans to help immigrants adapt to their new homes in Colorado. Ouattara is CAOs community health manager and works to drive down rates of HIV while boosting education about issues ranging from breast and prostate cancer to managing diabetes.

Among the programs he runs is one that deploys more than a dozen lay community health workers into Denvers African community to boost health literacy among women and to ensure that new immigrants know how to access the complex health system in the U.S.

Ironically, when CAO Executive Director Kit Taintor was searching for the right person to head the community health worker program, she wanted a woman. But, she found Ouattara instead. His enthusiasm and warm smile are contagious. He empowers female health workers, whom he trains then dispatches into their communities. As a male doctor, Ouattara has brought a secret weapon to the program.

The women conduct regular monthly teaching sessions in their communities. The programs are aimed at educating women, but often men attend as well. Both Taintor and Ouattara said that many African men who come to the U.S. bring with them patriarchal stereotypes that men are superior. When Ouattara attends outreach sessions with the women, he essentially gives the women his blessing.

What hes able to do is answer all the higher-level medical questions that come up. He also backs up the women and gives them respect. As a man, Oumar is helping because the men are sitting there nodding. It allows the women to build up their credibility in the community, Taintor said.

The outreach sessions have proved tremendously helpful to open doors so immigrants can seek critical preventive and diagnostic care in the U.S.

The meetings have become an informal place to ask hard questions, said Taintor. A woman might say, My husband is peeing all the time (a possible symptom of prostate cancer). The health workers can tell them, You need to go to the doctor and this is where you can go.

He said the African health system is entirely different. Few people there think of seeing a doctor to prevent illness. Rather, you see a doctor when you are sick. And Ouattara says the entire family engages with you. If a patient is in the hospital, the family provides the patients food and supports the care.

Ouattara said there are other simple differences. For instance, Africans will often bow their heads and not look directly into the eyes of a caregiver.

If I look down, I am giving you my full respect, Ouattara said.

But, U.S. caregivers often find this behavior disconcerting. They want to look their patients in the eyes. Ouattara urges Africans to learn new ways.

You can bring your culture here. But you also have to adapt to the new culture.

Ouattara and the community health workers are finding that immigrant women are taking more ownership for their health issues. For instance, the community health workers counseled one woman who had met a fellow African immigrant online. The man lived in another state and the two had never met in person, but planned to marry. The health workers encouraged the woman to ask the man to take an HIV test before their marriage. The woman followed their advice. As soon as she suggested the test, the man disappeared. While the woman was sad that the relationship had crumbled, she told the health workers that she was relieved to have avoided possible HIV exposure.

In another case, Ouattara and the health workers halted a potentially dangerous tuberculosis outbreak. They learned of an older woman who was home with severe coughing, fever and weight loss. She was afraid to go to the hospital and thought that without money, she could not get care.

TB is a public health issue. We will take care of you, Ouattara said.

Educating women so they can become leaders in their communities gives them confidence and puts them on the front lines for improving health access for immigrants.

Africans are more integrated into the U.S. health care system, Ouattara said. Women are in the middle of everything children, husbands, families. We know that if the women get the message, then the husband gets the message too.