Childrens advocates, industry representatives and state officials have been meeting with lawmakers to draft a new law that likely will move forward in the coming weeks in the Colorado legislature. The measure has not been introduced yet. Sen. Linda Newell, D-Littleton, will be sponsoring the measure in the Senate while Rep. Beth McCann, D-Denver and Rep. Ken Summers, R-Lakewood, chairman of the House Health and Environment Committee,will co-sponsor the bill in the House.

The Colorado bill may be similar to a California law that took effect on Jan. 1 of this year and brought the national carriers back to their child-only insurance market, albeit kicking and screaming, according to California consumer advocates.

The California law bars insurance companies that refuse to sell child-only plans from selling policies in the larger individual insurance market for five years. Giving up that market would cut insurance industry profits dramatically. In California, the individual market for individuals and small groups generated $17 billion in revenue in 2009, according to the Los Angeles Times.

Colorado consumers in both the individual and group health insurance markets paid nearly $10 billion in premiums in 2009 for their coverage, according to the Colorado Division of Insurance.

Colorado law already states that insurers who choose to withdraw from a particular segment of the insurance market such as large-group insurance, small-group insurance or individual plans are barred from that market for five years. Because the child-only market is only one component of Colorados individual market, the insurance companies could come back into that market. Colorado currently has no requirement that insurers here must offer child-only plans.

When the Affordable Care Act passed last spring, discrimination against children with pre-existing conditions was supposed to become a thing of the past. 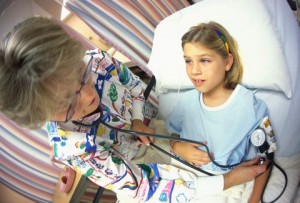 In September, the first of the health laws new measures went into effect, including regulations prohibiting insurance companies from denying coverage to children with pre-existing conditions. At that time, several of the major national for-profit insurance companies abruptly dropped child-only policies in Colorado and in most states across the country.

Only two nonprofit carriers, Rocky Mountain Health Plans and Kaiser Permanente have continued to sell the child-only plans in Colorado.

Colorados former insurance commissioner passed emergency regulations in September creating limited open enrollment periods to help allay industry fears that parents would wait until children were sick to enroll them in the plans, then pull them out when they no longer needed care. Those emergency measures since have been codified in permanent regulations that went into effect on Jan. 1. But the national carriers still have not returned to the child-only market.

Rep. McCann said she was really angry when the big companies pulled out.

I felt the insurance companies were not acting responsibly. These kinds of policies are critically important, she said.

McCann and Sen. Newell started working on a bill with a coalition of childrens advocates and found a surprising level of cooperation with insurance industry representatives. There is now bipartisan sponsorship in the House with Rep. Summer serving a co-sponsor.

While outsiders might think that insurance companies would make more money if they had less competition, industry representatives actually want a requirement that all companies must offer the child-only plans if they wish to sell other types of individual insurance.

Requiring all the carriers to sell this sort of plan creates a level playing field, said Ben Price, executive director of the Colorado Association of Health Plans. This is one of those unusual situations where were asking for more competition. If everyone else is in the market, the risk is spread across the entire market. Each company can afford to take on more risk.

The insurance companies also view limited enrollment periods as crucial for sick children so parents dont wait to sign them up until they need care. Conversely, industry officials want to find a way to allow healthy children to sign up year-round so they can have a larger pool and further divide the risk.

We dont want to drive up premiums, Price said. Cost is all important in this industry.

Still, Price said the insurance companies are eager to get back into the market and to serve potential clients, especially parents who desperately need health insurance for their children.

Its not a huge number of people compared to the total, Price said. But its huge for those people who need it.

Child-only health plans comprise a relatively small part of the entire insurance market because most children with insurance are on their parents plans or they receive care under public programs like Medicaid and CHP+.

Under Colorados new child-only regulation, families with children needing care can buy insurance during open enrollment periods this month and in July. But the only two carriers who can help them with those products are Kaiser, which does not have statewide programs, and Grand Junction-based Rocky Mountain, which does operate throughout Colorado.

Demand for the plans seems to be on the rise, both because children with pre-existing conditions can now get coverage and because family plans are getting more and more expensive, said Neil Waldron, chief marketing officer for Rocky Mountain Health Plans.

He said demand for child-only plans has doubled since October of 2010, when Rocky Mountain started tracking the plans separately from children who receive insurance on their parents plans.

Because of competitive concerns, Waldron declined to share actual numbers, but he said that of all the applications they received for children, 41 percent were for child-only plans, while the rest were for children who would be part of their familys plan.

Waldron said of those who applied for child-only plans, 36 percent had previous health issues. That compares with 22 percent of children who are insured under family plans and have pre-existing conditions. The costs of the plans vary significantly based on the childs age and health history. But they are not big money-makers. Waldron said that Rocky Mountain will almost certainly lose money on the child-only plans, but it will continue to sell them because its the right thing to do.

Were a nonprofit. Were focused on providing coverage to the entire community. So, for instance, in Grand Junction, we make sure all Medicaid (clients) have access to care. This is just another part of our mission, that we should not be denying coverage to those who seek it, Waldron said.

Because the demand is not overwhelming, Waldron does not anticipate that children with pre-existing medical conditions will put Rocky Mountain into financial jeopardy.

He said he was concerned when the other insurance companies, aside from Kaiser, pulled out of the market.

Quite honestly, I was surprised. I anticipated that all the commercial carriers would share in the risk. When we found out that only ourselves and Kaiser were doing it, it was a little nerve-racking, but we felt that we should offer the plans, he said.

Among the supporters for the child-only legislation in Colorado are the Colorado Childrens Campaign and a coalition called All Kids Covered. Since lawmakers, advocates and insurance industry representatives are working together to support the bill, Cody Belzley, vice president of public affairs for the Childrens Campaign, is hopeful that the child-only market will be restored.

While we applaud Kaiser and Rocky Mountain, we want to secure a robust marketplace, she said. The worst-case scenario is that Rocky and Kaiser decide they cant bear the risk and we wind up without coverage.