The vaccines sit like liquid gold in a high-tech refrigerator fitted with alarms that scream if the temperature climbs too high. A power outage generates a full-fledged red alert. Managers must transfer the vaccines to a safe, cool refuge away from the office until the power pulses on again. 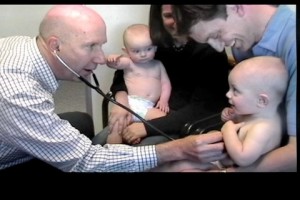 For pediatricians and family doctors, managing expensive vaccines has become a complicated dance, a business all its own. For small practices, the cost has become overwhelming, forcing some doctors in rural areas to take out loans to buy them or stop stocking them altogether and send patients to community health clinics instead.

The debate over Colorados once-dismal immunization rate has centered on parents who refuse to give vaccines or alter the recommended schedule because they fear adverse health effects. But access to vaccines in primary-care practices and the increasing burden on doctors is a story that few people understand.

At Cherry Creek Pediatrics, a large practice with eight physicians in Denver, these disease-fighting immunizations, given at almost every well baby visit, mark the practices second largest expense every year. Only payroll exceeds the cost of the vaccines.

Last year, Cherry Creek physicians spent more than $1.2 million purchasing vaccines. The doctors have to pay up front for the doses and hope that insurance reimbursements will flow in fast enough to keep the practice in the black.

That alone is like running a small business. Its a huge expense, but not a moneymaker. If you have any waste, it can become a money loser, said Dr. Steve Perry, an owner-physician at Cherry Creek.

You can see how a smaller practitioner would not be incentivized to keep a lot in the refrigerator. The new vaccines often are more expensive and they expire. A lot of smaller, rural practices cant keep up with the shelf life. Usually you have to pay within a month or two. So you have to turn it over, Perry said.

Managers at Cherry Creek shave expenses and try to postpone paying for the vaccines.

We try to defray the costs. We buy in bigger volumes. We put them on credit cards. Weve tried to figure out any way we can to decrease the costs, said Perry. A special refrigerator with an alarm holds costly vaccine doses, which are like “liquid gold” for pediatricians and family doctors.

The story is the same elsewhere around the state. Dr. Martin Pirnat has been a family doctor in Durango for 34 years. He practices with five doctors and one nurse practitioner at Durango Family Medicine and says his practice copes with costs day by day.

The cost of vaccines is the single largest medical supply item that we have. It runs us thousands a month, Pirnat said. We run an awfully tight ship, so we havent taken loans yet. But, it affects our bottom line. We have to ask, Is there money in the bank or not? Pirnat said.

We do it because I believe its part of being a complete family medicine practice. But more and more, we have to struggle to do it. Its very difficult, he said.

Pirnat said he and his partners will have to reevaluate policies in 2011 once they review the reimbursement rates from both private insurance companies and publicly covered children.

Recent studies indicate that doctors around the country are grappling with similar dilemmas.

In 2008, two studies in the journal, Pediatrics, found that managers in medical practices were struggling to afford vaccines and some were considering no longer offering them.

Dr. Gary L. Freed of the University of Michigan, co-authored both studies. The first study surveyed about 800 pediatricians and family doctors around the country. About half said they had delayed buying vaccines because they were too expensive. And 11 percent if the doctors said they had considered dropping vaccinations because they were losing money. Pediatricians were less likely to consider a halt to vaccines. They viewed them as a cornerstone to their practice. But, about 20 percent of family physicians said they were considering dropping vaccines.

The second study revealed problems with reimbursement rates and dramatic disparities in the different rates providers received. Some lost money every time they gave a vaccine while other providers received more for the same vaccine.

Neither study looked at vaccines for poor children. Doctors receive those vaccines for free, but receive very little reimbursement for the time and cost of administering them. 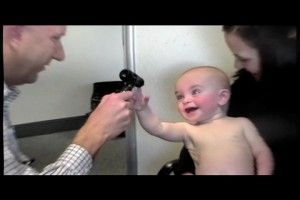 Lily, 1, reaches for the light before receiving vaccinations at her one-year well baby check up.

As co-chair for the policy committee for the Colorado Childrens Immunization Committee, Perry is absolutely convinced that vaccines save lives and are safe. Yes, they are expensive up front. He once calculated that the full set of vaccines for a baby would cost more than $4,000 if the parents paid out of pocket. But the illnesses they prevent are much more expensive to treat and potentially fatal. In California, this year alone, eight infants have died from whooping cough, also known as pertussis. For adults, the illness manifests just like a cold with a bad cough. But, its highly contagious and extremely dangerous to babies.

When I was a resident, I saw a couple of kids with meningitis and whooping cough. Ive seen fatalities, Perry said. Its not something you take lightly.